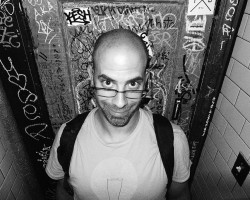 In the beginning, there was The Funk.

At least, that’s how it was for Adam Dorn, who spent his childhood obsessed with the bass-driven, on-the-one sounds of the Gap Band, Chic, Zapp, Brothers Johnson, Weather Report and other esteemed purveyors of funk-tastic goodness. It was an obsession that drove Dorn to pick up the electric bass, and led him to a career in music — first as a session musician, then as acclaimed electronic artist Mocean Worker, who helped pioneer the Electro Swing movement by whimsically mixing modern beats with samples of jazz giants like Count Basie and Duke Ellington. As Mocean Worker, Dorn has also contributed music to numerous films and television shows over the years, including the end theme to AMC’s Better Call Saul and the Emmy nominated/NAACP Award- winning score for the documentary Richard Pryor — Omit the Logic.

But despite the groove-heavy nature of his music, Dorn always avoided playing bass on Mocean Worker records, out of concern that he might sound too much like Marcus Miller, the jazz giant whom he’d worked and studied under during his late teens and early twenties. “I remember doing something where I was playing, and Marcus said, ‘You sound just like me — and that’s not so great.’” Dorn explains. “I was like, ‘Okay, I need to find my own voice.’ Making my own records up to this point, I’ve been like, ‘No bass — if I play bass on the record, I’ll sound like him.’”

During the making of Mocean Worker, his self-titled eighth album, Dorn realized that he’d been back-burnering his own funky impulses for far too long; ironically, it was Miller who turned the (flash)light bulb back on over his head. “I was working with Marcus on his latest album “Afrodeezia”, and he was like, ‘Why don’t you play bass more?’” Dorn laughs. “So that kind of emboldened me, as did working on the Richard Pryor documentary, because it got me back into funk in a big way. It got me more focused on the music I was into as a kid, because I was really into Pryor when I was a kid — that was like the defining thing for me. I felt like I’d finally developed a style as an artist that was identifiable enough as mine that, if I snuck my bass in there now, it’d be like, ‘Oh! He’s also pretty funky!’”
Dorn did more than just sneak his bass onto Mocean Worker; his deft, purposeful playing is squarely at the forefront of the new album, driving eleven tracks that retain his signature sound while delivering a serious whomp on the low end of the sonic spectrum. The result is easily the funkiest MoWo record to date, a righteous and resounding tour-de- groove that’s sweeter than a Tito Fuentes bat flip.

No products were found matching your selection.