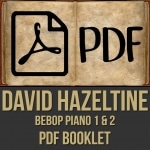 Description: This 10 page PDF includes the embedded notation from David’s bebop piano lesson videos 1 & 2. NOTE: Like all of our PDFs, this is not meant to be used without the video, since it doesn’t contain improvised examples, phrasing, advice, etc. This is just an add-on PDF for people who would like a PDF version of the notated sections (in the videos).

“David Hazeltine is for sure the brightest star on the jazz piano horizon. His style has a deep-seated commitment to jazz history while communicating a wealth of today’s ideas…” – Cedar Walton

DAVID HAZELTINE is one of a handful of young pianists who has successfully forged his own distinctive style and musical voice out of the accumulated greatness and weight of a modern piano tradition. David’s influences extend from Art Tatum and Bud Powell to such great living masters as Buddy Montgomery, Barry Harris and Cedar Walton.

David made his professional debut at age thirteen in Milwaukee, and later worked extensively in and around Chicago and Minneapolis. In Milwaukee, David served as house pianist at the famed Milwaukee Jazz Gallery, working with such greats as Charles McPherson, Eddie Harris, Sonny Stitt, Pepper Adams and Chet Baker. In fact, it was Baker who encouraged David to make his mark in New York City.
Since moving to New York City in 1992, David has made a name for himself as a “musician’s musician.” In addition to his working trio (with drum legend Louis Hayes and bassist Peter Washington), David is in constant demand as a sideman. Recent credits include work with Freddie Hubbard, James Moody, the Faddis-Hampton-Heath Sextet, the Carnegie Hall Jazz Band, the Louis Hayes Quintet, and Marlena Shaw, for whom he serves as pianist, arranger, and musical director.

Recently David was spotlighted on Marian McPartland’s “Piano Jazz” radio program. David is also a member of the band “One For All” which features rising tenor star Eric Alexander.

David’s debut cd as a leader Four Flights Up (featuring Slide Hampton,) released in 1996 on the Sharp Nine Label, received high praise from critics and musicians alike.  Since then, he has recorded seven more cds for Sharp Nine, the latest being The Inspiration Suite.  David has also recorded six cds for the Criss Cross label, the most recent being Blues Quarters Volume 2.  In Japan, David’s six piano trio releases for the Venus label, including tributes to Bill Evans, Horace Silver, Bud Powell, and Burt Bacharach, have won him a large and growing following.
In addition to David’s twenty three dates as a leader, his recorded work as a featured sideman reflects his status as one of the first call pianists in New York.  Recent efforts include sessions with James Moody, Freddy Cole, Marlena Shaw, Jon Faddis, and Louis Hayes.

As a dedicated teacher, Hazeltine’s career reflects his intense commitment to the advancement of jazz culture and awareness. In Milwaukee, he was co-founder and director of The Jazz School, and Department Chairman at the Wisconsin Conservatory of Music.  Recently, he served as Associate Professor at Berklee College Of Music.  Currently, David is on the piano faculty at S.U.N.Y. Purchase.
Perhaps David best sums up his feelings about his art and his career: “… the development of the body of music we call jazz is one of the marvels of the 20th century. To contribute to that tradition is all I want to do.”