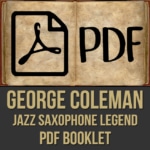 Description: This 15 page PDF includes the embedded notation from George Coleman’s “Jazz Saxophone Legend” masterclass videos 1 & 2 in the keys of C and Bb. It is not intended to be used without the videos. This is a supplemental PDF. 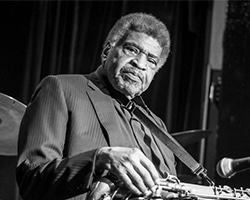 No tenor saxophonist better epitomizes the robust muscularity of that heavyweight instrument of jazz expression than George Coleman. With brilliant technique and a deeply soulful tone firmly rooted in his hometown of Memphis, George has performed with many of jazz’ most legendary figures and influenced countless saxophonists during his half century in music.

Growing up in Memphis’ rich musical environment of the late ‘40s and early ‘50s, alongside such notables as Booker Little, Harold Mabern, Frank Strozier, Jamil Nasser, Hank Crawford, Phineas Newborn Jr., and blues immortal B.B. King, Coleman began to teach himself to play the alto saxophone in 1950, upon being profoundly affected by the music of Charlie Parker.

So prodigious was his talent that George was soon performing locally and in 1952, at the age of 17, was invited to tour with B.B. King after the guitarist heard him in a local club. Coleman spent three more years on the vibrant Memphis scene, expanding his musical knowledge through his associations and influences, and writing for popular artists including the Moonglows and Ray Charles.

In 1955 he rejoined B.B.’s band, but this time on tenor sax, which would become his primary horn from that point on.

In 1956 George moved to Chicago, along with Booker Little. The bustling jazz scene brought him together with local heavyweights like Gene Ammons, Johnny Griffin, John Gilmore and Ira Sullivan, and he joined Walter Perkins’ group, The MJT + 3. When Max Roach heard George with this unit in 1958, he invited him to join his own quartet featuring Kenny Dorham on trumpet.

Coleman moved to New York later that year and has made his home there ever since. Booker soon replaced Dorham in the group and George remained with Max for two years. When eminent trombonist Slide Hampton formed his octet in 1959, George and his Max Roach bandmates Little and Julian Priester formed the brass-heavy front line with Slide and Freddie Hubbard.

He remained with Hampton until 1962, touring Europe for the first time during his stay. But more importantly, he began focusing more on his own composing and arranging, laying the foundation for his own octet that would be formed in 1974 and which is still a powerful force on the scene today.

After a brief stint with organist Wild Bill Davis, a call from the incomparable Miles Davis in 1963 briefly re-united Coleman with his old Manassas High schoolmates Mabern and Strozier, who soon departed in favor of the personnel that would form one of the most influential groups in jazz history.

For two years George was a member of that groundbreaking quintet with Herbie Hancock, Ron Carter and Tony Williams, recording four classic albums – Seven Steps to Heaven, My Funny Valentine, Four and Miles Davis in Europe – before departing to pursue other projects, leaving that highly visible position to Wayne Shorter. The following year George and Hubbard joined with Miles’ rhythm team for Herbie Hancock’s landmark Maiden Voyage, one of the most popular albums in the history of jazz.

Over the ten years from 1964-74, Coleman freelanced as a member of various groups led by some of the music’s most prominent figures, including Lionel Hampton, Lee Morgan, Elvin Jones, Charles Mingus, Betty Carter, Chet Baker, Shirley Scott, Charles McPherson, Cedar Walton and many more. He also composed and arranged for various ensembles.

Since 1973 Coleman has focused primarily on his own groups, working in quartet, quintet and octet settings, adding the soprano saxophone to his arsenal in 1990. With those various groups the powerful saxophonist has become a prominent figure at festivals, prestigious concert halls and top clubs all over the U.S. and Europe, also performing as a special guest artist with such notable pianists as Ahmad Jamal, Hilton Ruiz, Richie Beirach and the late Tete Montoliu. He has recorded more than a dozen albums as leader for labels such as Verve, Muse, Timeless, Evidence, Birdology and most recently, Two and Four, not to mention plus countless recordings as a sideman.

For the past 30 years George has also been a major force in jazz education. In addition to his private teaching of advanced jazz techniques, he has also been a consultant and teacher at the New School University, Long Island University, New York University and Mannes School of Music, and has conducted workshops, seminars and master classes at universities all over the U.S.

A winner of numerous honors and awards, Coleman has twice been presented the Key to the City in his hometown, and in 1997 received the Jazz Foundation of America’s Life Achievement Award.

Despite his seemingly overwhelming schedule and commitments in jazz, Coleman has amassed formidable credits outside that scene as well.

Working briefly in the ‘60s with the outspoken and courageous actor/activist couple, Ruby Dee and Ossie Davis marked an area of interest that would remain with him in the ensuing years. George performed on the soundtrack and appeared in Sweet Love, Bitter – the intriguing and disturbing 1967 film featuring Dick Gregory, based somewhat on the life of the idol of George’s youth, Charlie Parker. And he also appeared in Freejack, the 1992 science-fiction film with Emilio Estevez, Mick Jagger and Anthony Hopkins; and 1996’s Preacher’s Wife with Denzel Washington and Whitney Houston. He was also featured on the soundtrack of Spike Lee’s first film Joe’s Bed-Stuy Barbershop: We Cut Heads.

A handsome and imposing figure, George has also amassed some significant modeling credits. In 1991, still photographs with pop icon Madonna appeared in major newspapers and magazines as part of the Truth or Dare! promotional campaign. And in 1997 he appeared in magazine layouts for The Preacher’s Wife. He’s also done fashion layouts for Ebony Magazine and Travel and Leisure.

At 76 years old, George is still in full motion. His latest CD, Four Generations of Miles with Ron Carter, Jimmy Cobb and Mike Stern was released on Chesky Records in October 2002.