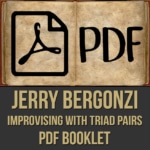 Description: This 9 page PDF includes the embedded notation and charts seen in Jerry’s “Improvising With Triad Pairs” series. Like all of our PDFs, it is not meant to be used without the video(s). NOTE: This PDF does not include the transcriptions of Jerry’s improvisations.

A fine, high-powered tenor saxophonist with a tone influenced by John Coltrane, a mastery of chord changes, and a strong musical imagination, Jerry Bergonzi has long had an underground following in the Boston area. He started on clarinet when he was eight, switching to alto at 12, and finally to tenor two years later. Bergonzi was inspired early on by Sonny Rollins, Coltrane, and Hank Mobley. He attended Lowell University and then after graduation played electric bass in local bands behind singers and strippers, saving up enough money to move to New York in 1972. After struggling in the Big Apple for seven years and gaining some recognition as a member of Two Generations of Brubeck and of the Dave Brubeck Quartet (with whom he appeared on several Concord albums during 1979-1981), Bergonzi moved back to Boston in 1981, where he developed a strong career both as a tenorman and as an educator. He has since led several groups (including two called Con Brio and Gonz) and recorded for the Plug, Not Fat, Red, and Blue Note labels.