Artist: Evan Marien
Length: 29:38
Description: In this live Dubstep on electric bass lesson, bassist Evan Marien shows you how to get that electronic Dubstep sound on a real electric bass. He demonstrates and discusses techniques for getting bass wobbles, manipulating effects and playing in the Dubstep style.  There are play-along tracks bundled with the download version of this video (not the $6.99 streaming version) which includes Evan's original track from the video (without bass), all the separate stems (all instruments soloed from the track) and a drum loop to practice with.  NOTE: Evan is using a Source Audio Manta Bass Filter and a Hot Hand in this Dubstep bass lesson, which are required for producing these Dubstep effects. 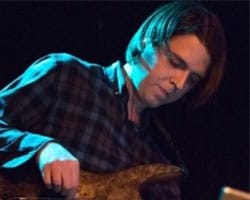 Most recently he has been seen playing bass, keys and singing backgrounds for Elliot Moss, playing bass with Thundercat drummer Justin Brown’s NYEUSI, and the last bassist to play in guitar legend Allan Holdsworth’s band.

Evan has also crossed over into the pop/rock/hip hop worlds recording with Mitski on her hit single ‘Nobody’, co-writing songs with Outasight and Baby Raptors , making sample packs with A$AP Ferg producer Frankie P and touring with Greyson Chance, Morgan James and more.