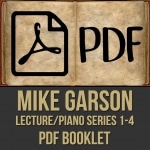 Description: This 42 page PDF includes all of the embedded notation and transcriptions seen in Mike’s videos (1,2,3 & 4). This is a supplemental PDF and it is not intended to be used without the videos.

Mike is perhaps best known for his relationship with David Bowie, which began in late 1971. He made his mark on numerous Bowie albums and has traveled thousands of miles on Bowie tours, including his 2003-04 “A Reality Tour,” Bowie’s first world tour in 20 years. In November 2006, Mike accompanied Bowie and Alicia Keys during a unique performance of “Changes” at an AIDS benefit in New York City.

Mike’s solid reputation for creativity and quality has motivated many other musicians to invite him to record on their albums, including Billy Corgan, Smashing Pumpkins, , No Doubt, and Trent Reznor, whom Mike first met during David Bowie’s 1996 “Outside” tour. Trent featured Mike on several tracks of Nine Inch Nails’ “The Fragile” album. Mike can also be heard on Seal’s “Human Being” as well as a bonus track at the end of No Doubt’s “Return of Saturn” album.

Since 1982, Mike has been a member of Free Flight, a jazz and classical ensemble featuring renowned flutist Jim Walker. In addition to serving as the group’s pianist, Mike composed most of their music. Free Flight appeared four times on The Tonight Show with Johnny Carson.

Mike and Billy Corgan collaborated in 1999, co-composing the score of the film Stigmata. Among their collaborations was the haunting hit “Identify,” which was performed by Natalie Imbruglia. In 2014, Mike and Trent Reznor collaborated on the song “Just Like You” for the hit film Gone Girl.

A lifelong learner, Mike has taught students at master classes and through private instruction. Mike has appeared at universities around the world where he has both guest lectured and performed for numerous music students and public audiences.