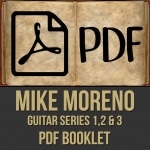 Description: This 17 page PDF includes the embedded notation from Mike Moreno’s masterclass videos. It does not include all of his transcribed improvisations and it is not intended to be used without the videos. This is a supplemental PDF.

After graduating, Mike moved to New York City with a scholarship to attend the New School University. While still in school he began garnering the recognition necessary to be called to perform and tour with some of the most venerable names in the Jazz world as well as rising stars of the scene.