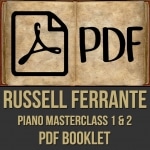 Description: This 24 page PDF includes all of the exercises and notation embedded in Russell’s masterclass videos (1 & 2). It also includes a full chart of his song “Indian Summer”. It does not include his transcribed improvisations and it is not intended to be used without the videos. This is a supplemental PDF. 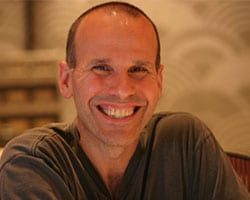 Russ’s first exposure to music came from his church, where his father was the choir director as well as being a frequent vocal soloist and having a vocal gospel quartet. His father’s whole family were music lovers and several of his brothers and sisters had marvelous voices, something Russ admits never got passed on to him. “I began piano lessons at 9 with the expectation that I’d one day be the church pianist. My musical interests took me elsewhere but my sister who is 2 years younger actually went on to fulfill my parent’s dreams and is now directing the music department for a church in Watsonville, CA,” Russ says.

Besides his early interest in the piano, Russ also tried other instruments, making the most headway on drums, even going as far as playing drums on a couple of gigs and recording sessions. His experience with the drums has benefited his piano and keyboard playing and composing as a result.

As for musical education, Russ relates the following: “I took piano lessons from a wonderful piano teacher in San Jose, CA named Ann Penner, from age 9-16 or so, nothing fancy, just the basics. I got interested in jazz and pop around the age of 15 and studied that from whatever sources were available, notably scattered lessons with local jazz musicians, jazz theory books that I found or were recommended to me, and listening to my favorite recordings and transcribing songs and solos. Regrettably I never really studied music in school.”