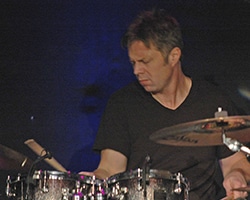 Cliff Almond was born in Tallahassee Florida. Coming from a family of musicians, his father a choral conductor and his mother a piano teacher, Cliff was exposed to various styles and influences at a very young age. His parents started him on violin at the age of 5, but Cliff was constantly gravitating toward the drums and other percussion instruments. Cliffʼs parents purchased him a drum set when he was eight years old and from that point on he was playing along with records and began studying the instrument with various teachers around San Diego.

By the time Cliff was 13 years old he began performing in local bands and orchestras throughout California. He was often accompanying various choral ensembles conducted by his father at San Diego State University, as well as playing in pit orchestras, rock bands, jazz ensembles, and for various theater productions around San Diego.

When Cliff was 17 years old he attended the Percussion Institute of Technology in Hollywood, California for a year of study and began to immerse himself in the drums. On weekends he would commute to San Diego to perform in various groups, and was also beginning to work on various recording projects including jingles and film dates.

When Cliff was 20 years old he began corresponding with then Chick Corea Drummer Dave Weckl. Weckl then heard Cliff play at a drum clinic sound check and was kind enough to recommend Cliff to pianist Michel Camilo a few weeks later. Cliff landed the Camilo gig in New York and moved to the city when he was 21 years old.

Cliff has been featured in many international Music magazines such as Modern Drummer Magazine, Slagwerkkrant (Holland), Drums (Japan), BASS (Japan), Keyboard (Japan), and Sound and Recording (Japan), as well as on television shows such as CBS This Morning, Austin City Limits, and CBS Night Watch.