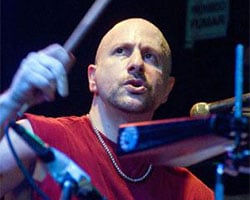 Bronx native Daniel Sadownick earned a Master’s Degree in Musical Education at New York University, where he also studied composition. He then went on to study privately with percussion masters Andrew Cyrille, John Amira and the late, great Frankie Malabe. After graduating, Mr. Sadownick toured with the Lionel Hampton Orchestra for two years. It was here that Daniel made numerous contacts that would lead to tours and recordings with jazz greats such as: Michael Brecker, Dennis Chambers, Nicholas Payton, Christian McBride, Nat Adderley, George Coleman, Dianne Reeves, Carl Allen, Nnenna Freelon, Dewey Redman and many others.

A versatile percussionist that does not limit himself to one genre, Daniel has spent the last few years touring and recording with such diverse artists as: Steely Dan, Jennifer Lopez, Billy Idol, Tony, Toni Tone’, Maxwell, Angie Stone and Me’shell Ndege’Ocello.  Daniel is also a member of the New York based cult band the Screaming Headless Torsos, who were listed as one of the top ten bands in America in the February 1996 issue of Musician Magazine.

Recently, Daniel premiered his own project, which is called Function Over Structure. It features all original compositions as well as showcasing the utilization of percussion in a “straight-ahead jazz context.” Daniel feels that percussion in jazz at this present stage seems to be limited to a certain style that does not included all the possibilities of the instruments. “I want to include all my influences when I play jazz. That runs the gamut from the Art Ensemble of Chicago to Joe Zawinul; from Cannonball Adderley to Frank Zappa. These musicians were torchbearers and pioneers. “I hope that my contributions make a statement that is parallel to these exceptional artists. They were consistent in their commitment to bring passion, intensity, and soul to their music.”

Daniel also teaches private studies in percussion and is a faculty member of New York University.

Daniel states that “Living in New York City is a blessing.  Being a cultural center one has access to the many different peoples and music that cover the range of the globe; Jazz, Afro-Cuban, Brazilian, Rock, Fusion – it’s all here in this beautiful city.

I feel lucky to have been born and raised here.”