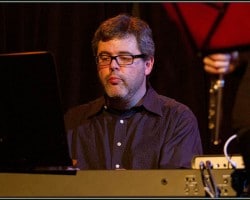 Gilson Schachnik is an associate professor in the Ear Training Department and adjunct faculty in the Ensemble Department at Berklee College of Music. Born in Sao Paulo, Brazil, Gilson toured the country with Rosa Maria and Patricia Marx. He also recorded jingles for BASF, Playboy magazine, and TV Cultura.
After receiving a scholarship in 1990, Schachnik moved to Boston, Massachusetts, to attend Berklee and graduated in 1996 with a Bachelor of Music in Jazz Composition. Since then, he has performed with Peter Erskine, Harvey Mason, Claudio Roditi, Bill Pierce, Miguel Zenon, Antonio Sanchez, and many others.
Schachnik joined the faculty in 2002, and wrote Beginning Ear Training. In 2010, he and Brazilian drummer Mauricio Zottarelli formed the group Mozik, releasing their first recording, Mozik. Since then the group has performed extensively in the U.S. In addition to being an active performer in the Boston area, Schachnik has been a member of Berklee’s audition team and has performed auditions and given master classes in Canada, Brazil, and Palestine.