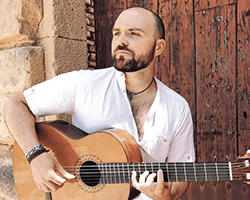 Santiago, producer, composer and musical director, has in the market 4 albums as soloist: “El Sendero de lo imposible”(2008),
“Sentimientos Nuevos” (2012), “Flamenco Tribute to Pat Metheny” (2017) and the recent “La Guitarra en el tiempo” (2019).
From a young age he made several world tours accompanying the maestro Manolo Sanlúcar as well as his recordings and tours with symphony orchestra, in works such as “Locura de Brisa y Trino” and “Medea”.

Together they have toured throughout the world, in places as prestigious as the Alcázar Theater (Madrid), Queen Elizabeth Theater (London), Sadller Wells (London), Theater de la Ville (Paris), Maison de la Danse (Lyon), Ewerk (Berlin), International Music House (Moscow), La Fenicce Theater (Venice), Luciano Pavarotti Comunale Theater (Modena), Parco della Música Auditorium (Rome), St Lowrence Center for the Arts in Toronto (Canada) and many more. As a record producer, in addition to his own albums, he has made records of important flamenco cantaores in Spain of the new generation as “Luna de Enero” by Miguel Soto “Londro”, “Mi Retoque al cante jerezano” by David Lagos and “With the voice on earth “by David Carpio.

Santiago Lara, serious and dedicated artist, is characterized by a constant development of his own language, recognizable in his touch. In the same way, he stands out for always offering passion in his shows, obtaining the best response from the audience where his music and guitar are called to sound. He is currently immersed in the promotion and concerts of his current album “La Guitarra en el Tiempo”, as well as the tour of his latest production, “Tauromagia”, choreography for the work of Manolo Sanlúcar, together with bailaora Mercedes
Ruiz , premiered at the last Bienal de Sevilla with a resounding success of critics and audiences, and where they plan to perform in such important places as the Festival de Jerez, the Guitar Festival of Córdoba and the Flamenco Art Festival of Mont de Marsans and more.

During the month of April 2019 he is invited by the University of Nuevo Mejico to give music and guitar master classes in Albuquerque.
In May of 2019 he toured the US giving master classes and giving concerts, along with Mercedes Ruiz in cities such as Portland, Seattle and Washington DC. He is currently director of the International Festival of the Flamenco Guitar of Jerez, of which he is also creator and promoter.