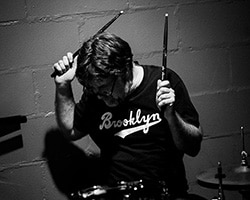 Drummer Tony Mason grew up in Southern Pines, North Carolina and started playing at the age of 7. After studying at East Carolina for one year, Tony came to NYC in 1986 to finish his education at The Manhattan School of Music, where he received a performance degree in classical percussion. Tony was also very active in MSM’s jazz program.