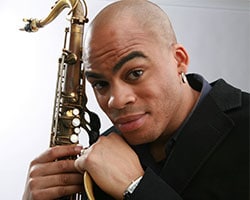 Since moving to New York City in 2000, Grammy Award winning tenor saxophonist Wayne Escoffery has become one of the Jazz world’s most talented rising stars and in-demand sidemen. At only 37 he has recorded seven CDs as a leader and been on numerous recordings as a sideman. Wayne began his professional New York career touring and recording with The Eric Reed Septet.

In 2001 he became a steady member of the Mingus Big Band/Orchestra/Dynasty, The Lonnie Plaxico Group, and Abdulah Ibrahim’s Akaya. Then in 2004 Grammy award winning producer, arranger and trumpeter Don Sickler asked Wayne to be a part of Ben Riley’s Monk legacy Septet (an innovative piano-less group dedicated to carrying on the legacy of jazz great Thelonious Monk).

At this time Wayne was also touring with Jazz At Lincoln Center’s Music of the Masters consisting of two groups of musicians hand picked by Wynton Marsalis. The Music of Dexter Gordon featured Wayne with Saxophonists Jimmy Greene and Gerry Welden; backed by Dexter Gordon alumni George Cables, Rufus Reid and Leroy Williams. The Music of Miles Davis featured Wayne with trumpet great Eddie Henderson and alto saxophonist Steve Wilson in the front line; backed by David Kikoski, Ed Howard and Miles Davis veteran Jimmy Cobb on drums. In 2006 Wayne secured one of the most coveted gigs in jazz: a frontline position in Tom Harrell’s working quintet.

In addition to being a part of some of the last true “apprenticeship” opportunities of our era, he has delivered six studio dates as a leader.

In a review of his 2004 release “If Dreams Come True” (a collaborative project with vocalist Carolyn Leonhart) Senior Editor of Allaboutjazz.com John Kelman wrote:
Escoffery’s command of the instrument is impressive, able to navigate broad intervallic leaps with a sound that is robust in all registers.

In October of 2006 Wayne signed with Savant Records, founded and run by noted record industry legend Joe Fields and his highly respected son Barney. His first CD for Savant called Veneration (released in March of 2007) was recorded live at Smoke Jazz Club in NYC and features Joe Locke on vibes, Hans Glawichnig on bass, and Lewis Nash on drums. His most recent recording “The Only Son of One” on Sunnyside Records is Escoffery’s first recording of all original music and features his new two keyboard quintet with pianist Orrin Evans, Miles Davis veteran keyboardist Adam Holzman, bassist Hans Glawischnig and drummer Jason Brown.

Despite his musical talent Wayne (born on February 23rd, 1975 in London, England) grew up in a relatively non-musical household. In 1983, he and his mother moved to the United States eventually settling in New Haven, Connecticut in 1986. Wayne always enjoyed singing whatever music he heard but it wasn’t until his relocation to New Haven that his formal music education began. At age eleven Wayne joined The New Haven Trinity Boys Choir, an internationally known Boys Choir that toured and recorded annually. At this time he also began taking private saxophone lessons and playing the tenor saxophone in school bands.

By the time he was sixteen he left the Choir and began a more intensive study of the saxophone, attending The Jazz Mobile in New York City, The Neighborhood Music School and The Educational Center for the Arts, both in New Haven. During his senior year in high School, he attended the Artist’s Collective in Hartford, Ct. It was there that he met Jackie McLean, the world-renowned alto saxophonist and founder of both The Artist’s Collective and the jazz program at The Hartt School. (Jackie) McLean gave Wayne a full scholarship to attend The Hartt School, where he graduated summa cum laude with a Bachelor’s degree in Jazz Performance, and became known as one of McLean’s prize pupils. While at Hartt, Wayne played with such jazz greats as Curtis Fuller, Eddie Henderson, Philip Harper, Albert Heath, and many others. He went on to attend The Thelonious Monk Institute of Jazz Performance at The New England Conservatory in Boston. It was a full scholarship two-year college program, accepting a small select group of the world’s most talented young jazz artists every two years. At the Institute, he toured with Herbie Hancock and studied with George Coleman, Jimmy Heath, Don Braden, Clark Terry, Ron Carter, Barry Harris, Charlie Persip and other Jazz masters.
In May 1999, Wayne graduated with a Masters degree from The New England Conservatory moving to NYC in 2000. Since then, he has performed with countless internationally respected musicians and has become known for his beautiful sound, impressive technique and versatility. J. Robert Bragonier of All About Jazz Magazine writes, “This is a talented youngster capable of long, flowing lines, noteworthy creativity, and a broad range of expressiveness.” When commenting on Jackie McLean’s influence on Escoffery, he writes …”the latter’s influence is apparent in his knowledge of jazz history, lean, angular harmonies, and muscular tone.” As well as performing with his new quintet, Wayne Escoffery currently performs locally and tours internationally with Ben Riley’s Quartet, The Mingus Big Band/Orchestra/Dynasty, Ron Carter’s Great Big Band vocalist Carolyn Leonhart, and The Tom Harrell Quintet where he also acts as co-producer having co-produced Harrell’s last four releases: Prana Dance, Roman Nights, The Time of the Sun and No. 5. The vast array of contributions Wayne has made to the Jazz world in such a short time leads seasoned industry professionals like Niel Tesser to write, “Pay special attention to tenor man Wayne Escoffery, whose rapid development – from album to album (and seemingly solo to solo) – has given us a jazz hero for the coming decade.