Artist: Abraham Laboriel
Length: 24:39
Subtitles: English, Italian, Spanish
Description: In part two of this bass lesson (2 of 2), legendary bassist Abraham Laboriel discusses and demonstrates concepts that have helped shape his iconic style.  Abraham delves into articulation, the importance of versatility, chordal playing and more as he shares tips that have kept him on top of the session world for over four decades.  If you're a fan of Abraham Laboriel and want some advice from a true legend, this bass masterclass is for you. NOTE: You can purchase both videos in this series at a discount here! 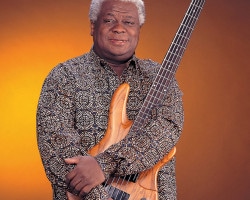 Abraham Laboriel was born in Mexico City. Originally a classically trained guitarist, he switched to bass guitar while studying at the Berklee College of Music. Henry Mancini encouraged Laboriel to move to Los Angeles, California and pursue a recording career. His brother was the late Mexican rock & roll singer Johnny Laboriel. Their parents were Honduran immigrants from the Garifuna coast.

Laboriel has worked with artists of many music genres including the following:

In 2005, Abraham was awarded an Honorary Doctorate of Music by the Berklee College of Music.