Artist: Alan Pasqua
Length: 30:55
Subtitles: English, Italian, Spanish
Description: In this jazz piano lesson video, renowned pianist Alan Pasqua shows you how to incorporate intervallic concepts into your playing. Alan shows you how to create non-linear improvisations in the vein of horn players (Michael Brecker, Coltrane, Woody Shaw, etc.), so you can apply these fresh sounds to your musical performances. If you want to break out of the box and add a new spark to your jazz piano playing, this masterclass is for you. 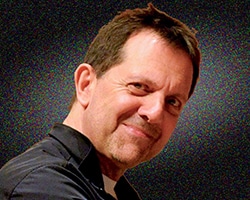 While performing a concert at Carnegie Hall in 1975, Pasqua met the legendary drummer Tony Williams. Pasqua was asked to join The New Tony Williams Lifetime along with guitarist Allan Holdsworth. After recording two “Lifetime” albums for Columbia Records, Pasqua relocated in Los Angeles. His career in L.A. broadened as he started playing with more rock and pop artists. He has been a member of the bands of Bob Dylan and Santana. Some of his other pop album and touring credits include: Ray Charles, Aretha Franklin, Elton John and Queen Latifa. In addition, he has worked with composers John Williams, Quincy Jones, Dave Grusin, Jerry Goldsmith and Henry Mancini and on motion picture soundtracks. In addition, Alan composed the soundtrack for Disney’s hit movie, The Waterboy, and is co-composer for the CBS Evening News Theme.

He also recently provided the piano improvisations for Bob Dylan and his Nobel Prize acceptance speech.

Aside from his many critically acclaimed recordings as a leader in jazz, in 2008, Pasqua joined forces with Peter Erskine and Dave Carpenter, arranging, co-producing and playing on the Grammy Award nominated trio album “Standards”. His recent releases are “Twin Bill” (BFM JAZZ) and “Northern Lights”. “Twin Bill” features Pasqua recorded on two pianos, playing the music of Bill Evans. “Northern Lights” is a new set of Pasqua original compositions, exploring his roots in classical, pop and jazz idioms. Both CDs have received critical praise from DOWNBEAT with 4 star reviews. His latest release, “Soliloquy” is a stunning solo piano recording of Alan’s favorite standards recorded in Los Angeles on his own Hamburg Steinway concert grand piano.