Artist: Ben Allison
Length: 28:46
Subtitles: English, French, Spanish
Description: In this "Extended Bass Techniques & Composition" masterclass, renowned bassist and composer Ben Allison discusses some unorthodox approaches to the instrument and how they've influenced his tunes. Ben breaks down various examples to show you how you can use these techniques (or your own) to seed creative ideas in your playing and writing. If you want to start looking outside the box for inspiration on your instrument, this bass masterclass is for you. NOTE: There is a small PDF bundled with the download version of this video (not the $8.99 streaming version) which includes the embedded notation seen in the video. 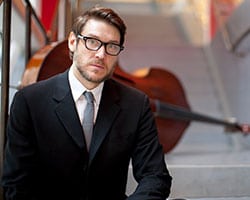 In a career that spans nearly 30 years, bassist/composer Ben Allison has developed his own instantly identifiable sound, solidifying an international reputation as one of the leading voices of his generation. Known for his inspired arrangements, inventive grooves and hummable melodies, Ben draws from the jazz tradition and a range of influences from rock and folk to 20th century classical and world music, seamlessly blending them into a cinematic, cohesive whole.

With his groups The Ben Allison Band, Think Free, The Easy Way Trio, Peace Pipe, and Medicine Wheel, Ben has toured extensively throughout the world, winning fans and building new audiences with an adventurous yet accessible sound and a flair for the unexpected.

In 2005, 2008 and 2013, Ben was a featured composer, arranger and performer with Jazz Sinfonica, an 80-piece orchestra based in Sao Paulo, Brazil. The orchestra performed Ben’s compositions Little Things Run the World, Riding the Nuclear Tiger, Roll Credits, Green Al, and others from his various albums. Ben performed his Carnegie Hall debut as a leader in February 2012. A multi-part short documentary of Ben preparing for the concert was filmed.

Born in New Haven, Connecticut, Ben has performed and collaborated with an extremely diverse range of artists including oudist Ara Dinkjian, kora player Mamadou Diabate, saxophonists Lee Konitz and Joe Lovano, Cambodian chapei master Kong Nay, legendary performance artist Joey Arias, tap dancers Jimmy Slide and Gregory Hines and US Poet Laureate Robert Pinsky. He has appeared on over 50 albums by various artists and has written music for film, television and radio, including the theme for the National Public Radio (NPR) show On the Media (which boasts a listenership of over 2,000,000 people), the score for Two Days, a play written by Pulitzer Prize-winning author Donald Margulies and the theme for The Conversation, a webcast talk show hosted by Pharrell Williams.