Artist: Bruce Gertz
Length: 33:28
Subtitles: English, French, Spanish
Description: In this jazz bass lesson, acclaimed bassist and Berklee College of Music professor Bruce Gertz shows you the basics of walking bass. This classic video was originally filmed in 1986 as an accompaniment to Bruce's book (also called "Walkin"), but was previously only available in non-digital formats. With the permission of Bruce, we have decided to re-release this insightful video online so that a new generation of bassists can learn from this valuable info. Bruce discusses and demonstrates upright bass technique, walking bass line creation, tone and more. If you want to get a grasp on the fundamentals of walking bass, this video is for you. 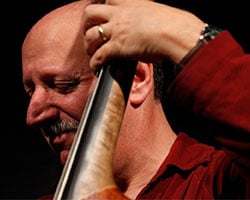 Bruce Gertz had piano lessons at age six for a brief period. He began playing guitar at age ten. By age fourteen Bruce moved to the bass guitar and started playing rock, blues and later jazz. His first bass guitar teacher was Anthony Evangelista who taught the basic fingerings and reading skills as well as simple chord outline.

Bruce went on to study advanced improvisation concepts and techniques with Charlie Banacos, world-renowned jazz guru. This graduate type of study lasted six years and to this day the material remains valuable for practice.