Artist: Charles Ruggiero
Length: 61:27
Description: In this jazz drums masterclass, drummer Charles Ruggiero shows you how to improve your feel on the kit. Charles breaks down the concept of "swing" and explains how this often misunderstood feel can be learned and internalized. If want to learn how to really swing in multiple styles of music, this drum lesson is for you! NOTE: Due to the subject nature, this masterclass is conceptual with more talking then playing examples. 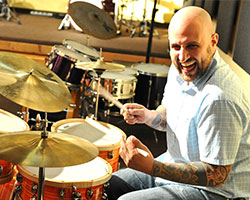