Artist: Chico Pinheiro
Length: 32:07
Subtitles: Chinese, English, French, Italian, Korean, Portuguese, Spanish
Description: In this "Contemporary Improvisation" guitar lesson, master guitarist Chico Pinheiro follows up his "Contemporary Comping" lesson with some additional concepts. Chico demonstrates devices and exercises to help with your soloing, harmonic fluency, phrasing, story-telling, articulation and more. NOTE: There is a PDF included with the download version of this video (not the $8.99 streaming version) which contains the embedded notation seen in the video. This video is part one (1 of 2) of Chico's "Contemporary Jazz Guitar" masterclass and you can purchase both videos and the PDF in this series at a discount here! 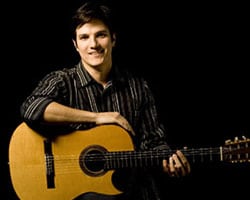