Artist: Chris Walden
Length: 35:19
Description: In this masterclass, renowned composer and arranger Chris Walden shows you various methods for reharmonizing songs. Chris discusses and demonstrates how to work with the melody, use chord substitutions, employ turn arounds and much more. If you want to get some inside tips from one of the industry's elite, this masterclass is for you. NOTE: There is a PDF bundled with the download version of this video (not the $9.99 rental version) which includes supporting notation. 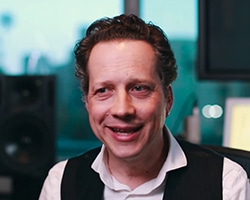