Artist: Daan Kleijn
Length: 32:47
Description: In part two (2 of 2) of this jazz guitar lesson, acclaimed guitarist Daan Kleijn shows you his approach to chords and voicings. Daan breaks down his system of finding and applying these shapes on the instrument so that you can expand your chord vocabulary and explore new sounds. If you want to add some cool new textures to your playing, this guitar lesson series is for you. NOTE: There is a PDF bundled with the "purchase" version of this video (not the $9.99 "rental" version) which includes the onscreen notation. You can purchase both videos and the PDF in this series at a discount here! 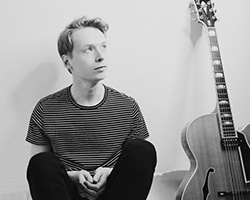 Following a “brilliant debut album” (De Telegraaf NL), Daan Kleijn presented his second CD: “Passages” in 2018. Once again accompanied by Joost van Schaik (Brussels Jazz Orchestra) and Tobias Nijboer (Fuse). In their fifth year of existence the trio released an inspiring album showcasing, through a repertoire of seeming simplicity, the expressive force of jazz. Refreshing original compositions, melancholic Brazilian songs and carefully chosen jazzstandards emphasize the “extensive dynamic range of this trio, [which is] is simply magical” (Jazzpodium DE). All of this reinforced by the beautiful spatial acoustics of the Bethlehem Church in Amsterdam Noord where the album was recorded. A next chapter for Daan Kleijn and his trio.

Daan Kleijn grew up in Groningen, The Netherlands where he studied at the Prince Claus Conservatory. During his studies he received many awards such as the Northern European Jazz Talent Award. Thanks to a full scholarship from the Huygens Talent Program, he got the opportunity to continue his studies at the prestigious New York University.

Nowadays Daan works as a jazz guitarist all over the world and divides his time between the Netherlands and New York City. He regularly performs at New York’s famous jazz clubs such as the Blue Note, Birdland and Smalls Jazz Club. He toured in China, Greece, Switzerland, the US, Poland, Italy, Germany and Belgium. He can be heard as a sideman on numerous CD’s alongside jazz greats such as Rodney Green, Billy Drummond, Sam Yahel, Rich Perry, Glenn Zaleski and Mike Rodriquez.

Daan Kleijn has taught masterclasses in the USA, Europe and Asia and is a jazz guitar professor at the Academy of Music and Performing Arts of Fontys University.