Artist: Dida Pelled
Length: 49:07
Description: In this guitar masterclass, renowned guitarist and singer Dida Pelled shows you how to incorporate and improvise with open-voiced triads. Dida breaks down her system of harmonizing scales and melodies with these voicings, so that you can open up new possibilities in your playing. If you want to add a beautiful and full texture to your accompaniment, songwriting and/or improvising, this guitar lesson is for you. NOTE: There is a PDF included with the "purchase" version of this lesson (not the $9.99 "rental" version). 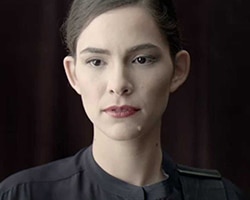 New York-based Israeli guitarist and vocalist Dida has a particular talent for storytelling. Whether it be a jazz standard, a scorching blues number, an old country ballad, or a heartfelt original “Dida sings in a voice sometimes playful, warm, resonant, no frills. She sings the words, giving them their meaning, their weight, with perfect diction and charm.” (Jazz Hot, France)

One of the first people to take note of Dida’s abilities and promise was trumpet player and producer Fabio Morgera who put together her first recording project. The album ‘Dida Plays and Sings’ was released on the quality Italian label ‘Red Records’ in 2011 and boasts two of today’s jazz greats on the bill, Roy Hargrove and Gregory Hutchinson. ‘All About Jazz’ chose the album as one of the best albums of that year and asserts that “Pelled’s warm voice possesses an emotive quality that’s simultaneously soothing and intoxicating, and her guitar playing, which is built on her round sound, strong comping skills and soulful single note solo lines, places her in a category all her own.” (All About Jazz)

Dida graduated with honors from the prestigious Jazz Department at The New School, and was then able to shift her focus to recording the music. The result is an eclectic but cohesive statement that covers her wide range of musical interests and abilities. This music came from years of performances in both larger and smaller venues worldwide, including: Smalls Jazz Club, Rockwood Music Hall, City Winery, Highline Ballroom, The Living Room, Dizzy’s at Lincoln Center and other notable New York musical landmarks, as well as worldwide at the Fillmore Jazz Festival- SF, Padova Jazz Festival in Italy, Atlanta Jazz Festival, Ottawa Jazz Festival, Red Sea Jazz Festival and The Tel Aviv Jazz Festival in Israel, among others.

In 2016 Dida released her third album, ‘A Missing Shade Of Blue’, an instrumental bluesy guitar/organ trio with Rodney Green on drums and Luke Carlos O’Reilly on organ, plus special guests, under the Italian label ‘Red Records’.