Tony Bruno 2 (Getting The Gig)

Tony Bruno 2 (Getting The Gig)

Artist: Tony Bruno
Length: 33:00
Description: In part two (2 of 2) of this "getting the gig" masterclass, musical director Tony Bruno tells you what you need to know in order to nail the audition, land the gig and keep it! You will learn what musical directors are looking for in musicians, how to present yourself, what to do at auditions, how to avoid common mistakes, how to become a music director and more. NOTE: You can purchase both videos in this series at a discount here!

Topics Covered: Being Professional on the Road, How Not to Get Fired, Getting Too Close to the Artist, Becoming a Musical Director, The Band Dynamic, Playing Live TV Shows, Performing With Recorded Tracks and a Click Track, Dealing With Adversity Before a Performance, Drinking on Gigs, “Staying in Your Lane”, Having Your Professional Gear Together, “One-Off Gigs”, Pedal Boards, Laptops, Programming, Dealing With Moody Artists, Etc. 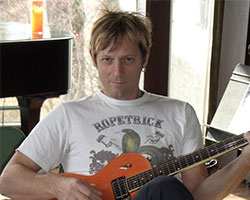 In 1999, Tony became MD and guitarist for Enrique Iglesias. He has since put together six of his tours and done countless TV performances. In 2005, when Anastacia needed someone to shake up her Live at Last tour, she called Tony. Together with choreographer Tina Landon, the two created a show so seamless and energetic that Anastacia added a second disc to an already finished DVD to capture it. “I do all the initial programming myself and make demos of all the songs for the artist. Once we agree on the arrangements, I bring in an additional programmer to run the show. ”

In the last 10 years, Tony has worked with Rihanna, Enrique Iglesias, K’naan, Karmin, Delta Goodrem to name a few. Tony is responsible for all facets of live shows, awards shows and TV shows, working closely with the artist, Audio and Visual people as a team. “We try never to repeat ourselves on TV shows. Its important, especially with YouTube out there. Youre basically giving your audience a small collection of videos.”

His TV production credits include Americas Got Talent, X-Factor, the AMAs, Jay Leno, Top Of The Pops, MTV Music Awards and TRL, and Wetten Das, and countless others. Tony has written and produced songs for top artists including Mandy Moore, Donna Summer, INXS, Colin Hay and Enrique Iglesias. His song Daylight in Your Eyes for German artists No Angels was the 2nd best selling German single of all time. Tony has written with the worlds top songwriters including Shelly Peiken, Lindy Robbins, Kara DioGuardi and Ty Lacy.

In the studio, Tony has lent his extraordinary guitar skills to numerous hit records with top producers like Ted Templeman, Bob Rock and Desmond Child, to name a few. But live shows have always been his passion. “Live music is the backbone of the music business”.

Tony is currently Music Director for La Voz Kids (the voice/kids) in Miami for the summer of 2013.

He lives in Brooklyn and has a studio in his house in Woodstock, NY.