Artist: Charlie Hunter
Length: 52:28
Subtitles: English, French, Italian, Spanish
Description: In this guitar masterclass, 7-string guitarist Charlie Hunter breaks down the elements of his style.  Charlie discusses and demonstrates a wide variety of concepts including how to develop counterpoint, playing cleanly, grooving, thinking like a drummer, getting your sound, gear, musicality and more.

Topics Covered: 7 string guitar tunings, bass and guitar counterpoint, establishing a groove, utilizing rests and spaces to create counterpoint, guitar and bass lines, playing convincing lines, playing sparse, incorporating different musical influences into your playing, playing solo vs. playing with a group, rhythmic practicing, right hand guitar techniques, thinking like a drummer, learning the guitar “rudiments”, playing tastefully, understanding when not to play, muting the guitar, things to look for in a drummer, how to handle yourself at shows, finding your authentic musical self, etc. 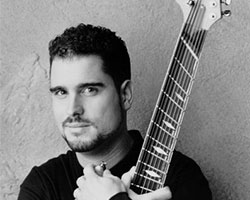 “I knew that I wanted to do this with my life from when I was 16”, says Hunter about his musical career. His early recognition of this may have been influenced by the fact that he grew up in homes where his mother repaired guitars for a living in Berkeley, California where he has lived since he was eight years old. Charlie picked up his first guitar when he was twelve years old for $7, and a few years later was taking lessons from Joe Satriani, who at that time was just another guitar teacher. “People can’t believe that but I was just another Berkeley kid and every Berkeley kid took lessons from Joe Satriani. He must have had a hundred students. He’s a great teacher.”

Charlie graduated from the same Berkeley high school whose music program produced saxophonist Joshua Redman and pianist Benny Green, but Hunter did not participate in the school’s prestigious music program. “I really wasn’t an institutional-type person. I had to go out and do my own thing. I was a naughty kid who went through the crazy angst-driven hysteria many teenagers experience,” says Hunter, who doesn’t deny not making it to class much. “Because I was from a low-income family, I was tracked into the lowest level of academic courses. You didn’t get a chance to develop much self-esteem there, so I decided to focus on something that made me feel good. I graduated by the skin of my teeth.”

“I was into everything at that point – blues, rockabilly, funk and soul…”, but it wasn’t until Hunter turned 18 that he discovered jazz. “My friends said, ‘You got to get into jazz, you’ve got to listen to Weather Report.’ And I thought, ‘This is fusion. I’m not really into that.’ So then somebody told me I should listen to Wes Montgomery, but the album I got was one of those with strings, and I was totally turned off. Finally, somebody said, ‘You need to check out Charlie Parker and Charlie Christian and John Coltrane,’ and it was like boom! I was instantly turned on. Their total sound and the reality of their playing just cut through everything. I suddenly wanted to play like that.”

Hunter soon discovered and became heavily influenced by such organ legends as Jimmy Smith, Larry Young, and Big John Patton. Mix this with some of his favorite artists from other genres such as Stevie Wonder, Marvin Gaye, Muddy Waters, Buddy Guy and Little Walter, and you can see where Hunter’s sound came from. But it was the exposure to so many various genres of music that Charlie is thankful for. “Growing up in the Bay Area had a profound effect on my music. I was exposed to everything from the Dead Kennedy’s to P-Funk to Art Blakey. In the Bay Area, you have all of these different musical cultures living together and all of these different musical cultures and their music gets semi-assimilated into this non-polarized state of being where hybrids are free to grow, and there are all of these genres and cross genres to play in and around.”

Michael Franti Charlie had his first 7-string guitar (2 bass strings, 5 guitar strings, 2 pickups) made for him in the late eighties, and, after figuring out how to play his custom-made toy, left for Europe to perform on the streets of Paris and Zurich. Upon returning to the states and gigging around South of Market clubs in San Francisco and in Berkeley playing by himself (covering both bass and guitar parts) he hooked up with poet/rapper Michael Franti. They performed together as a duo from time to time until Franti formed the Disposable Heroes of Hiphoprisy and brought Charlie with him. In 1993, Charlie joined them on their tour which included a year’s worth of huge stadium gigs opening for U2 along with Primus.

Dave Ellis Charlie left Disposable Heroes in 1993 in search of more jazz-oriented music. “It was interesting, but that whole pop art scene was an overall drag. I love pop music, but it’s a lot different when you get to sit back and be on the receiving end. It was difficult for me as an artist who’s dedicated to searching for the spiritual core of music to have to deal with being in a situation where the quest is in the most superficial, consumer-driven aspects of the recording industry. It’s hard enough driving for hours to get to the next city. When you get there, you at least want to play music that excites you.” He recruited his old elementary school friend Dave Ellis who was first chair tenor in the Berkeley High jazz orchestra. Although they traveled in different social circles, they remained friends throughout the years. “We did play together occasionally. As a matter of fact, I think Dave still has blackmail tapes.” It wasn’t until now though that he and Ellis hooked up for serious jazz sessions. With the addition of Jay Lane, who played drums in the original lineup of Primus, the Charlie Hunter Trio was formed.
Jay Lane After a few months of gigging around the Bay Area, the Trio landed a weekly gig every Tuesday night at the Elbo Room in San Francisco. This is where Hunter says they began to jell as a group playing a distinctive Bay Area style of jazz. “That’s where we learned to study the past and practice the present.” Primus leader, Les Claypool, soon talked the band into recording an album for him on his own label, Prawn Song Records (the logo spoofs Led Zeppelin’s Swan Song label portraying a shrimp with wings) a subsidiary of Mammoth Records. The self-titled Charlie Hunter Trio album was released at the beginning of 1994.

It wasn’t long before Trio gigs were packed with curious listeners at such clubs as the Elbo Room and the Up and Down Club in San Francisco. Around this time, Charlie had another guitar made for him adding a bass-string to make it an eight-string guitar. It didn’t take long for Blue Note Records to come along and snatch Hunter up for a recording contract. In 1995, Charlie Hunter Trio released their first major label record, Bing, Bing, Bing.

Attracting a younger, more rock-oriented audience to his gigs amuses Charlie. “I think that because we covered a Kurt Cobain song on the first Blue Note Record, people have decided we are really into alternative rock. Actually, Nirvana is probably the only alternative rock band that I know,” Charlie adds with a laugh, “but Cobain was a really good songwriter.”

“I think our music is an alternative to the suit-and-tie club that says you have to be well-to-do and super-intellectual to understand jazz music”, Charlie continues. “We don’t have that attitude. We play at places where people aren’t interested in pigeonholing instrumental music.” As a result, most Bay Area gigs were priced at no more than $5 and Charlie began exposing jazz to an audience that may otherwise have stayed away from it. “We’re jazz musicians, but we’re jazz musicians from their generation. That’s who we share aspects of a common life with and that’s who we are trying to reach.”

“We know the lineage of jazz and we’re completely in debt to it. We’ve built the foundation of our music on John Coltrane, on Charlie Parker, on Art Tatum and Thelonious Monk, all the way back through Louis Armstrong and Jelly Roll Morton to the turn of the century. We want people to know that this is the music that means the most to us. But we also want our audience to know that we are from the twenty something generation, that we share the same experiences as a lot of people our age. That’s what we want to communicate; that’s what inspires us. I am very proud of the fact that our audience is very diverse. There are a lot of women who come to our shows. There are a lot of kids-I mean teens and young adults-who bring their parents. And there are a lot of moms and dads who bring their kids, and that makes me feel like we’re doing something right.”