Artist: Gustavo Assis Brasil
Length: 45:19
Subtitles: English, French, Portuguese, Spanish
Description: In part two (2 of 4) of this epic guitar masterclass series, acclaimed guitarist, educator and author Gustavo Assis-Brasil gives you insight into his exciting approach to the instrument. Gustavo discusses and demonstrates how to use non-traditional voicings in standard progressions, how to use open strings to create fresh textures, how to develop your own sound and more. If you are looking to break out of the box and attain your own voice on the instrument, this guitar masterclass series is for you. NOTE: There is an optional PDF which includes the embedded notation seen in all 4 videos from this series. It is included in the DISCOUNTED BUNDLE AVAILABLE HERE or it can be purchased separately. 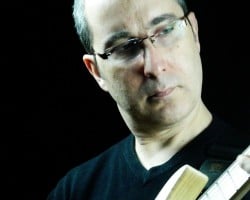