Artist: Hadrien Feraud
Length: 49:00
Subtitles: English, French, Spanish
Description: In this bass masterclass video, bass virtuoso Hadrien Feraud breaks down his exciting playing style.  Hadrien discusses and demonstrates soloing through changes, scale choices, technique, transcription and more.  If you're a fan of Hadrien and want to know how he developed his unique approach, this bass lesson is for you. NOTE: There is a PDF bundled with the "purchase" version of this video (not the $8.99 "rental" version) which includes the 2 chords charts and the scales/modes discussed in the video.  Also included is the notation for all the modes of the major scale and the jazz melodic minor scale. Topics Covered: Bass, soloing through changes, scales & modes, chords, jazz, technique, transcriptions, technical “jumps”, building your vocabulary, practicing, “connections”, avoiding the obvious, being musical, “chops”, warming up, etc. 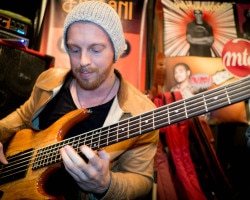