Artist: Adam Scone
Length: 43:05
Description: In this Hammond Organ masterclass, organist Adam Scone teaches you everything you've ever wanted to know about the Hammond B3 organ, including: popular Hammond B3 drawbar settings, how to properly setup and maintain your organ, accompaniment techniques, using the pedals and much more. 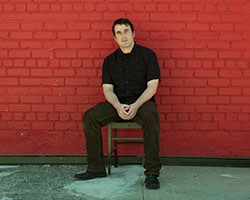 Organist Adam Scone remains true to his art form. “The organ is such a vital part of popular music”, he says, “and it’s important that people around the world get to hear it. It is critical that it is not forgotten.” Adam has dedicated his life to keeping the sound of the Hammond B3 organ alive. His new focus is to melt the stylistic preconceptions of the instrument, to break away from the artistic norm, and anticipates showing this creativity to a wider audience with his upcoming solo releases. Currently Mr. Scone has four records under his own name and over 30 as a sideman.

In 2001, 2002, 2003 and 2007, Mr. Scone was chosen as a Kennedy Center for the Performing Arts’ Jazz Ambassador. This enabled him to bring the organ sound to 24 Countries throughout Africa, South America and throughout the Middle East.

Adam was born September, 1975 in Cleveland, Ohio but grew up in Youngstown, Ohio. He began playing piano at the age of 5. At the age of 16 he switched to the organ after hearing the phenomenal organist Gene Ludwig play. He was highly encouraged by the great Youngstown drummer Shedrick Hobbs. Adam graduated from William Paterson University in New Jersey. In 2003 Mr. Scone also received an Honorary Degree of Music from the Honduras Conservatory of Music.