Artist: Rob Paparozzi
Length: 35:48
Description: In part three (3 of 3) of this harmonica lesson series, session harmonica player Rob Paparozzi gives you tips and tricks that have kept him in demand for all of these years. If you strive to be a professional working harmonica player, these masterclass videos are a must have! NOTE: You can purchase all 3 videos in this series at a discount here! 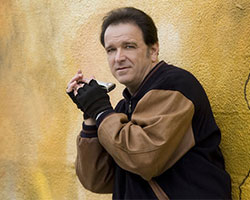 New Jersey-based frontman, singer, & harmonica player Rob Paparozzi has been a blues performer since 1967. But Rob is far from being strictly a blues musician. In fact, he’s at home playing a wide range of music, ranging from rock to blues to jazz to pop. This versatility is reflected in the long and remarkably diverse list of major artists Rob has worked with, including B.B.King, Dr. John, Bruce Springsteen, Whitney Houston, Carole King, Roberta Flack, Culture Club, Cyndi Lauper, Randy Newman, Jimmy McGriff, and James Galway.

Rob has toured the world with the “Original Blues Brothers Band”, featuring guitar legend Steve Cropper and special guest Eddie Floyd and also as Frontman-Lead Singer for the Legendary “Blood Sweat and Tears”.

Rob’s own band The Hudson River Rats features Ed Alstrom, John Korba, Chris Eminizer, Bernard Purdie, George Naha and Bailey Gee. The shows are Local in NY-NJ as well as International, Europe & Asia. In 2008 Rob worked on his debut CD which features many varied styles and “special guests”. In 2009 the CD has been getting lots of airplay worldwide and terrific acclaim in the press. Special thanks to Bob Putignano, Gary Walker, Michael Bourne and Rich Skelly for having Rob on their radio shows in 2009 WBGO, WFDU, WRSU and Roxy Perry on KCOR.