Artist: Joel Harrison
Length: 78:19
Subtitles: English, Spanish
Description: In this full-length jazz composition masterclass, Guggenheim Fellow and multi-award winning composer Joel Harrison gives you insight about his composition process.  Joel discusses both standard and long form pieces, unconventional harmony, instrumentation possibilities, melody, rhythm and much more.  If you are looking to enhance your jazz composition chops, this lesson is for you. NOTE: There is a PDF bundled with the "purchase" version of this video (not the $8.99 "rental" version) which includes the embedded charts/scores for “Harbor”, “The Wheel: Movement 5”, “Urban Myths”, "Chant for Jim Pepper” & “Grass Valley and Beyond”. 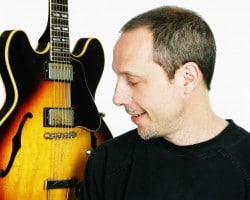 For brevity’s sake it would be safest to call Harrison’s home base jazz, a descriptor that mutates to fit a staggering array of styles and approaches. He finds inspiration from music too often barred from admission into the jazz consciousness, taking his place in a tradition of exploration and interpretation that reaches through the open-eared reinventions of Miles Davis and Charles Ives to the American rhapsodies of Walt Whitman, Jack Kerouac, or Hank Williams.
“Ultimately you’re just trying to arrive at great music,” he says. “Sometimes the best methodology is to leave people to their own devices, and sometimes it’s best to write everything down. It’s that simple.”

Harrison’s success can be seen in the accolades he has received: he was named a Guggenheim Fellow in 2010, is a two-time winner of the Jazz Composer’s Alliance Composition Competition, has received grants from Chamber Music America, Meet the Composer, the Flagler Cary Trust, NYSCA, and the Jerome Foundation.
Growing up in 1960s Washington D.C., Harrison became enamored with the inventive guitarists who were blazing the era’s new trails, such as Jimi Hendrix and John McLaughlin. In his twenties, after graduating from Bard College, Harrison undertook what he calls “the classic Jack Kerouac search for America,” hitchhiking cross-country and exploring the rich diversity contained between its coasts. “I wanted to figure this country out.” Sure I was a little naive, yet that search still resonates in my music.

A gifted arranger, he has also delved into the work of other composers – Beatles guitarist George Harrison, for instance, on 2005’s Harrison on Harrison (Highnote), or legendary drummer Paul Motian, whose repertoire Harrison arranges for string quartet and two guitars on his latest CD, String Choir (Sunnyside). No matter the source material, it is filtered through Harrison’s individual perspective, more an act of recomposition than arrangement.

Perhaps the most vivid examples of his own take on such experiments can be found on Range of Motion (Koch Jazz, 1997) and The Wheel (Intuition 2008), which bridge Harrison’s interests in classical and jazz. The former was written for an octet with woodwinds featuring Paul McCandless and bassoon player Paul Hanson; the latter also integrates the composer’s country and world music influences, replacing the winds with a string quartet that includes violinists Todd Reynolds and Christian Howes, violist Caleb Burhans, and cellist Wendy Sutter.

His classical compositions include Life Force, a collection of duos for cello and violin performed by Wendy Sutter and Tim Fain, on Philip Glass’ Orange Mountain Music label and a 2007 solo for marimba which won first prize in the Percussive Arts Society’s worldwide competition.