Artist: Brian Floody
Length: 27:52
Description: In part two (2 of 2) of this jazz drums masterclass, professional drummer Brian Floody teaches you a variety of jazz drumming techniques.  Brian shows you how to play stylistically common and important grooves, how to blend your sound with other instruments, how to play with a bassist, how to use dynamics effectively and how to be musical within different contexts. NOTE: You can purchase both videos in this series at a discount here!

Topics Covered: The jazz shuffle, the blues shuffle, the shuffle beat with brushes, the conga beat, the boogaloo beat, musical dynamics, blending your sound with the other instruments, dynamic control exercises, the role of the bass drum, keeping time with the bass, feathering the bass drum, playing two-beat feel, the role of the hi-hat, emulating great drummers, learning from the classic jazz drummers, etc. 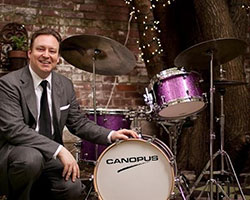 Born in New York City in 1971, Brian has spent the past thirteen years at his current residence in Brooklyn. While a teenager he studied timpani with Dr. John Beck at the Eastman School of Music. In 1989 Brian enrolled at the New School for Social Research and studied with many renowned musicians including Jimmy Cobb and the late Vernel Fournier.

Brian has had much experience as an educator having been the artistic director of the Emory University jazz festival, faculty at the Adirondack music camp, and master class presenter at the University of Miami, Western Michigan University and Laguardia High School in New York. He is currently on the faculty of the Brooklyn Conservatory and the Swett Arts Academy in the Bronx.

Featured on numerous recordings and television appearances, Brian can be heard on the upcoming Daptone Records release “Naomi Shelton and The Gospel Queens of Brooklyn.” In September he returned from a three week tour of Japan with guitarist Tomoya Hara and bassist Mark Tourian.