Artist: Jeremy Pelt
Length: 32:46
Subtitles: English, Spanish
Description: In this "Trumpet Sound and Warm-Ups" lesson, renowned trumpeter Jeremy Pelt shows you how to get a great sound on the instrument. Jeremy discusses and demonstrates airflow concepts, exercises and more in order to help you get the best sound possible on the trumpet. If you're looking to get the most out of your horn, this trumpet masterclass is for you. 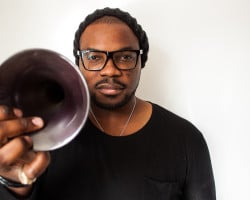