Artist: Larry Koonse
Length: 42:25
Subtitles: English, French, Spanish
Description: In this jazz pentatonics guitar lesson, acclaimed guitarist Larry Koonse discusses and demonstrates his approach to using pentatonic scales in the jazz idiom. Larry shows you how to play through standard changes with pentatonics utilizing groupings, rhythmic displacement, rhythmic dissonance, "chord family" and more. NOTE: There is a PDF bundled with the "purchase" version of this video (not the $8.99 "rental" version) which includes some handwritten materials (by Larry) that support these concepts. 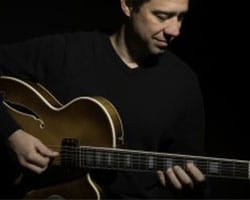