PURCHASE VIDEOS 3,4 & THE PDF AT A DISCOUNT HERE!

Artist: Pasquale Grasso
Length: 33:42
Subtitles: English, French, Italian, Spanish
Description: In part one (1 of 2) of this follow-up jazz guitar lesson series, virtuoso guitarist Pasquale Grasso shows you his approach to improvisation. Pasquale discusses and demonstrates exercises and concepts to help you create bebop lines through the changes. If you're looking to get inside the exciting playing style of Pasquale Grasso, this guitar masterclass series is for you! NOTE: There is a PDF bundled with the "purchase" version of this video (not the $8.99 "rental" version), which contains the embedded notation seen in the masterclass. If you want to buy this 2-part series at a discount, you can get the entire bundle here! 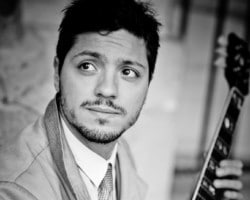