Artist: Brad Haehnel
Length: 60:14
Description: In part three (3 of 3) of this recording and music production masterclass, Grammy Nominated engineer/producer Brad Haehnel takes you from start to finish through the recording and music production process. Brad shows you miking techniques, studio tricks, sound tips and more.  This info-packed video series chronicles the recording and production of the song "Rainbows" by the Los Angeles based band, "Nicky Davey".  If you wanna see how an acclaimed producer/engineer works his magic, this video is for you! NOTE: You can purchase all three videos in this series at a discount here! 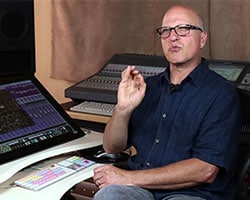