Artist: Terry Silverlight
Length: 37:50
Description: In this "swing feel grooves" drum masterclass, acclaimed drummer Terry Silverlight breaks down numerous swing feel beats and variations. Terry demonstrates various patterns on the ride, snare and bass drum so that you have an abundance of groove and fill options at your fingertips. If you're looking to add some new vocabulary to your jazz arsenal, this drum masterclass video is for you. NOTE: There is a PDF bundled with the "purchase" version of this video (not the $8.99 "rental" version) which includes the handwritten materials (by Terry) that are seen in the video. NOTE: You can purchase both videos in this series at a discount here! 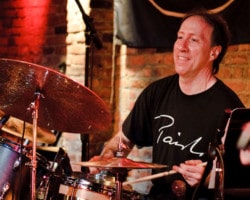 Terry Silverlight began his recording career at the age of 14 when he played drums on his brother Barry Miles’s album, WHITE HEAT, an innovative harbinger of the fusion movement. Terry’s college education was at Princeton University. Since then as a drummer, he has performed all over the world and recorded on gold/platinum albums and hit singles for Billy Ocean, George Benson, Natalie Merchant, Freddie Jackson, Stephanie Mills, Tom Jones, Laura Nyro, Anne Murray, Mel Torme, Jennifer Holladay, Phil Woods, The Fania All -Stars, The CTI All-Stars, Jonathan Butler. Film scores for One Fine Day, You’ve Got Mail, Object Of My Affection, My Blue Heaven, Titus, Frida, Slaves Of New York, What Planet Are You From, and countless jingles and TV shows. Terry has toured globally with Roberta Flack, the award-winning all-star Manhattan Jazz Orchestra (MJO), and many others.