Artist: Teymur Phell
Length: 37:46
Subtitles: English, French, Italian
Description: In part two (2 of 2) of this "swinging electric bass" lesson series, bassist Teymur Phell (Mike Stern, Arturo Sandoval) shows you how to get hired playing straight-ahead jazz on electric bass. Teymur discusses and demonstrates how to get a great tone, how to fluidly articulate your notes, how to use dynamics effectively and more. Instead of focusing on note choice, this series has an emphasis on sound and feel which is what will ultimately get you hired playing swing on electric bass, especially from jazz purists :). If you're sick of carrying your upright bass to jazz gigs, this masterclass is for you. NOTE: You can purchase both videos in this series at a discount here! 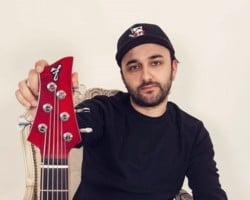