Artist: Will Vinson
Length: 69:42
Description: In this full-length jazz composition masterclass, acclaimed alto saxophonist and composer Will Vinson breaks down his composition process. Will discusses how he writes music and what he feels is most important in a jazz composition. He also dissects three of his original tunes, "Albemarle", "I Am James Bond" and "The Clock Killer". If you want to get an inside look into Will Vinson's creative process, this video is for you. NOTE: There is a PDF bundled with the "purchase" version of this video (not the $8.99 "rental" version) which includes the charts for Will's tunes demonstrated in the video. 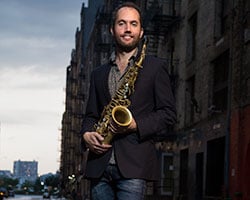