Ben Perowsky (Drumming in the Stream)

Ben Perowsky (Drumming in the Stream)

Artist: Ben Perowsky
Length: 34:43
Subtitles: English, Spanish
Description: In this drum masterclass, acclaimed drummer Ben Perowsky shows you what he works on in the practice room. Ben discusses and demonstrates how to internalize and solidify polyrhythms, limb independence and more. He breaks down his concept, "the stream" which allows you to directly link your limbs to different groupings, subdivisions & mixed meters, so you can take the mystery out of these seemingly complex concepts and lock it all in on the kit. If you're looking for some tips from an extremely versatile and in-demand drummer, this drum masterclass is for you. 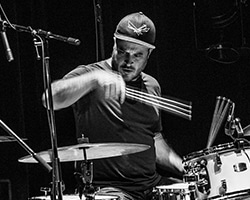 Perowsky’s notable career has placed him among a small vanguard of players able to move between jazz, experimental music and cutting edge pop and rock. As a teen in NYC, he appeared with Dizzy Gillespie as well as Cecil Taylor and was soon playing with artists such as Rickie Lee Jones, John Cale (Velvet Underground), Roy Ayers, James Moody, Bob Berg, Mike Stern and Michael Brecker. Later he played in NY bands Elysian Fields and Joan as Policewoman as well as John Lurie’s Lounge Lizards. He Co-founded the electric jazz group Lost Tribe and has continued to record and perform with Rock, Pop and Jazz legends such as John Scofield, Belle and Sebastian, John Zorn, Darryl Jenifer (Bad Brains), John Medeski (MMW), Dave Douglas, Lou Reed, Mike Stern, Tegan and Sara, Uri Caine, Steven Bernstein, Walter Becker (Steely Dan), Vernon Reid, Loudon, Martha and Rufus Wainwright. Ben has produced 8 critically acclaimed records to date. He also co-produced and launched the Woodstock Jazz festival in 2014 and is the drummer/percussionist for “Hadestown” the 14 Tony nominated musical by Anaïs Mitchell, now on Broadway.