Artist: Alternative Guitar Summit
Length: 50:41
Subtitles: English, Portuguese, Spanish
Description: In part two (2 of 2) of this "Indian & Middle Eastern Elements on Guitar" Masterclass, David "Fuze" Fiuczynski, Prasanna and Gyan Riley discuss how to incorporate eastern techniques into your guitar playing.  Along with moderator Joel Harrison, these three acclaimed guitarists show you their perspectives on Indian and Middle Eastern sounds, and how they blend these influences into their own playing/composing. NOTE: You can purchase both videos in this series at a discount here! 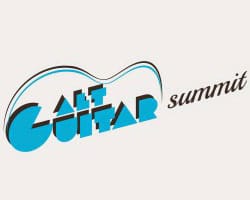 What the press is saying:
“When Nels Cline and Fred Frith played their first public duet it didn’t always sound like guitar music. It sounded, at times, like a sanitation truck’s trash compactor,  like a collapsing carillon, like a slowed down train wreck. That’s the beauty of the Alternative Guitar festival…which features guitarists who don’t just pick and strum.”  – Jon Pareles, The New York Times
“What a wonderful festival – Harrison outdid himself”– Fred Frith

What our audience is saying:
“Tonight was an unparalleled experience for me as a guitarist, musician, artist, father, son, husband, human being, everything. I feel that my entire spirit has been somehow healed or made more whole by this entire experience.” – Sebastien, concert-goer