Artist: Brad Russell
Length: 54:19
Subtitles: English, Spanish
Description: In this lead rock bass lesson, NYC bassist Brad Russell gives you a variety of techniques to help you stand out on the bandstand or in the studio. Brad discusses and demonstrates tapping techniques, harmonics, guitar emulation and more. If you want to add some explosive new tricks to your arsenal, this rock bass masterclass is for you! 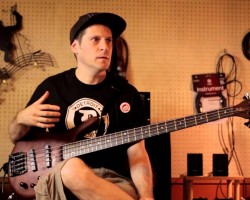 Born in Detroit to a multi-talented family, Brad Russell (aka Russo) was raised in an musically diverse household. He recalls,” my brother Brian listening to James Brown and the Temptations, my brother Kevin jamming to Grand Funk Railroad or Aerosmith and my mother spinning her favorite Bill Evans record. And this was all before dinner!”

At the age of seven, Brad joined his two older brothers, a duo featuring Brian on drums and Kevin on guitar.The Brothers Russell played the Detroit club circuit featuring “little Brad” on vocals.” By day I was a regular seven year old kid who went to school and played with the other kids, but at night I was like the motor city version of Donny Osmond!”

Five years later, Brad gave up the microphone for the acoustic bass and began playing with the school orchestra. Private studies with Detroit Symphony bassist Maxim Janowsky and virtuoso Gary Karr followed. In high school, Brad won numerous solo bass competitions and scholarships to the Interlochen music academy in northern Michigan. Also, upon recommendation from “American Idol’s” Randy Jackson he received a scholarship to the highly acclaimed University of Miami.While living in Miami, Brad ‘cut his teeth” on everything from symphonic music to rock cover band gigs. My brother Brian listening to James Brown and the Temptations, my brother Kevin jamming to Grand Funk Railroad or Aerosmith and my mother spinning her favorite Bill Evans record. And this was all before dinner!”

Upon graduation, Brad briefly moved back to California and began working for various musical theater productions. After playing for the west coast production of the broadway musical” Caroline or Change”, he decided to relocate to NYC and currently freelances on such Broadway hit shows as Grease,Jersey Boys & Memphis.In 2008 Brad auditioned and was hired for guitarist Joe Satriani’s world tour. Recently, Brad completed his CD “Lets Hear It!” which features guest appearances by Joe Satriani,Gregg Bissonette and Kevin Russell. Upon Satriani’s recommendation, Steve Vai listened to Brad’s CD and released it on his label “Digital Nations”.