Artist: Dan Haerle
Length: 19:01
Subtitles: English, Portuguese, Spanish
Description: In this "Using Guide Tones" masterclass, renowned pianist and educator Dan Haerle breaks down his system of utilizing guide tones to help you improvise freely and melodically through jazz chord changes. Dan shows you the "Dan Haerle Guide Tone Game" which he developed in his 25 year tenure as a professor at the College of Music, University of North Texas. NOTE: There is a PDF bundled with the "purchase" version (not the $7.99 "rental" version) which includes the embedded notation from the video. 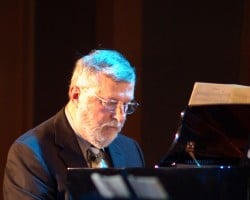 Dan was inducted into the International Association of Jazz Education “Hall of Fame” at the annual conference in Toronto on January 9, 2003. The IAJE Hall of Fame Award honors individuals whose musical contributions and dedication to jazz education over the past 25 years have created new directions and curricular innovations for jazz education worldwide.

In 2007, Dan completed his modified service at UNT and became a member of the adjunct teaching faculty. In the fall of 2007, he was named Professor Emeritus.
In 2008, Dan joined the faculty of the Dallas School of Music where he taught for seven years.

On January 6, 2012, the Jazz Education Network (JEN) awarded Dan (along with Jamey Aebersold, David Baker and Jerry Coker) the distinction of “LeJENd of Jazz Education” at its 3rd annual conference in Louisville, Kentucky.

In April of 2014, Dan received the DJAM (Dallas Jazz Apreciation Month) award of Jazz Educator of the year.

Education:
Bachelor of Music in Music Education from Coe College (1961)
Master of Music in Composition from North Texas State University (1966)