Artist: Brandon Brown
Length: 42:11
Description: In this funk, pop and gospel bass masterclass, professional bassist Brandon Brown demonstrates and discusses what has made him an in-demand musician.  Note: This masterclass was filmed along with guitarist Kyle Bolden (Stevie Wonder, New Genesis, etc.) and contains some of the same song examples and material found in Kyle's video.  Although some of the material is similar between the two videos, they are edited so as to provide completely different, individual perspectives. 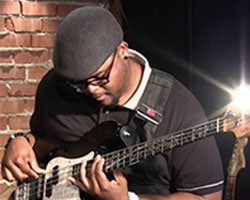 Born and raised in Memphis, TN. Brandon’s love for music was apparent at an early age. Playing drums at 2, he showed that he was serious about it!! After hearing Victor Wooten’s cover of “Overjoyed” by Stevie Wonder,he picked up the bass and never looked back (age 15)! Brandon is also a founding member in the band New Genesis. Five young black men that found early success in the city of Memphis decided to follow their dreams and move to Los Angeles in 2007. Since then they have toured/performed/produced for MANY artists such as Stevie Wonder, Isaac Hayes, Boyz ll Men, The Jacksons, Ali Woodson, El Debarge, Dr.Dre, Chrisette Michele, Jessica Simpson, Dj Paul, Juciy J, Project Pat and Leona Lewis to name a few. His love for his family and God is what keeps him motivated to keep striving for excellence.