Artist: Kyle Bolden
Length: 38:49
Subtitles: English, Spanish
Description: In this funk, pop and gospel guitar masterclass, professional guitarist Kyle Bolden demonstrates and discusses what has made him an in-demand musician. Note: This masterclass was filmed along with bassist Brandon Brown (The Jacksons, New Genesis, etc.) and contains some of the same song examples and material found in Brandon's video. Although some of the material is similar between the two videos, they are edited so as to provide completely different, individual perspectives. 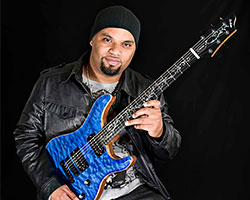 Kyle “Golden” Bolden, was born in Memphis Tn, April 4th 1981. At the age of 5, Kyle played “Chopsticks” on the piano by ear, it was then his mother knew that he had a talent for music. At the age of 11, Kyle got his first electric guitar, and has been playing ever since. “Golden Bolden” attended Overton Performing Arts High School in Memphis, Tn. It was his tenure with the Overton Jazz Band that allowed Kyle to expand his musical vocabulary. During those years, Kyle began to make a name for himself by playing around the city in various clubs. After graduating high school, Kyle received a full music scholarship to the University of Memphis. He continued to exercise his gifts in many musical genres, making him a very versitile player. Kyle joined Nujynisis in 2001. He immediately felt a vibe like no other. He was convinced that this band would change the music scene, and bring back “real” music. He has had the privilege of working with Chrisette Michele, Musiq Soulchild, Keith Robinson from Dreamgirls, Bobby Brown, El Debarge, The Callaway Brothers from Midnight Star, Jakiem Joyner, Ollie Woodson, Stevie Wonder, Yolanda Adams, Keyshia Cole, William Bell, Glenn Jones, Willie Hutch, Kirk Whalum, Phil Perry, Silk, India Arie, DJ Paul and Juicy J, Yo Gotti, Frayser Boy, Lil Wyte, Isaac Hayes, and Carlos Broady. One of his latest accomplishments includes playing on Oscar Winning Song “Hard Out Here For a Pimp.” Check him out on Hustle & Flow’s behind the scenes footage. He has currently relocated to Los Angeles with Nujynisis. Kyle is touring and recording with Stevie Wonder.