Artist: Gene Lake
Length: 33:20
Subtitles: English, Spanish
Description: In part two (2 of 2) of this "Rhythmic Relativity" drum masterclass, renowned drummer Gene Lake shows you how he maintains a solid flow across numerous styles, time signatures and more. Gene discusses and demonstrates his approach to understanding the relativity of a piece of music, getting into a flow, working on your hands, listening and more. If you want to start internalizing the time, expressing yourself and "hearing the whole picture", this drum lesson series is for you! NOTE: You can purchase both videos in this series at a discount here! 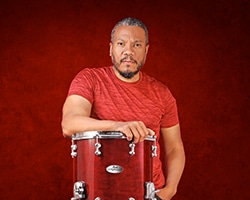