PURCHASE VIDEOS 1 & 2 IN THIS SERIES AT A DISCOUNT HERE!

Artist: Glenn Zaleski
Length: 37:46
Subtitles: English, Spanish
Description: In part two (2 of 2) of this jazz piano masterclass, acclaimed pianist Glenn Zaleski shows you how to unlock the potential of your left hand. Glenn brings you through various exercises aimed at strengthening your left hand and giving it equal importance while playing the instrument. If you really want to bring your performances and arrangements to life, this jazz piano lesson is for you. NOTE: There is a PDF bundled with the "purchase" version of this video (not the $8.99 "rental" version), which contains the embedded notation seen in the masterclass. If you want to buy this 2-part series at a discount, you can get the entire bundle here! Topics Covered: Jazz, Piano, The Left Hand, Exercises, Independence, Keeping the Form, Keeping Time, Harmonic Rhythm, Making a Part, Etc. 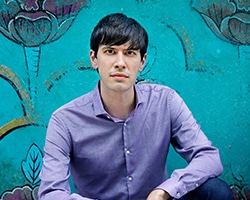