Artist: Brady Cohan
Length: 29:49
Description: In this guitar masterclass, professional guitarist Brady Cohan shows you why he's such an in-demand and versatile guitarist.  Brady discusses and demonstrates how to create interesting guitar parts out of simple ideas, how to outline chord changes, how to use pedals to change your sound, how to play outside the chord changes, how to approach different styles, how to get gigs and more. 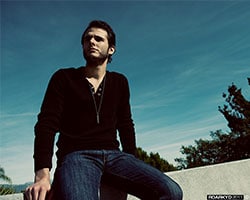 Brady Cohan is a guitarist, composer, and arranger based in Los Angeles, CA. Originally from the Bay Area, Cohan moved to Los Angeles in 2003 to study music at the University of Southern California. While attending school, he helped found New West, a jazz chamber group which toured all over Europe, Japan, Canada, and the United States. Through this group he had the chance to perform and work with the likes of Pat Metheny, Diana Krall, William Kanengiser (of the GRAMMY-winning Los Angeles Guitar Quartet), GRAMMY-winning vocalist Gretchen Parlato, and Larry Koonse. During his time at USC, Cohan also worked for the Music Department at 20th Century FOX researching song/artist potential for specific movie projects. Upon graduating in 2007, he went to work for the EMMY Award-winning composer Trevor Morris at the renowned Remote Control Productions (Hans Zimmer’s production facility). Cohan worked on various projects during his time there, including the hit Showtime series “The Tudors”, as well as “The Incredible Hulk” movie starring Ed Norton and Liv Tyler. Since leaving Remote Control, Cohan has gone on to write, arrange, and play guitar on numerous movies and TV shows such as “Good Vibes” (an animated series scheduled to premier on MTV this fall), “Camp Rock 2”, “Aliens in the Attic”, and “The Loop”. Cohan has also scored and written songs for a variety of independent films including “K Citizen” (accepted into the Cannes Film Festival), “Mac & Cheese, A Romantic Story” (directed by Noam Bleiweiss, featured director in the “New Filmmakers Los Angeles” series), and “Guilt” (also directed by Bleiweiss).

In addition to his work as a film composer, Cohan works extensively as a touring and studio guitarist. He is currently the house guitarist on the hit television show “American Idol”. This summer, he will be joining the Stewart Copeland and Stanley Clarke band on a European tour. Prior to that, he was on and off the road with nine-time GRAMMY-winning singer, Natalie Cole. Cohan has also just completed work on his debut solo EP featuring songs that he wrote, arranged, and performed. It is entitled “Don’t Miss A Thing”, and can be found on iTunes and CDBaby. His rock band, Knee High, has also just begun work on their EP. It is scheduled for release this spring.