Artist: Avi Rothbard
Length: 44:04
Subtitles: English, Italian, Spanish
Description: In this jazz guitar masterclass, professional guitarist Avi Rothbard shows you the fundamentals of jazz guitar.  Avi demonstrates how to begin soloing through changes and "standards", how to improve your comping, how to utilize bass line comping and more. 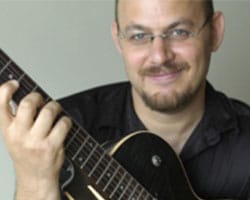 Avi Rothbard is an Israeli born jazz guitarist from New York. Originally from Kibbutz Gan Shmuel, Rothbard’s first professional gig was at the age of seventeen. After drafting from the IDF, Rothbard moved to Jerusalem to attend the Rubin Academy of music near the Hebrew University. He started to perform and record regularly in Tel Aviv and Jerusalem as a guitarist, as well as an electric bassist with artists such as Boris Gamer, Avishai Cohen, Amikam Kimelman, Jean Claude Jones, Jess Koren, Arnie Lawrence, Mamelo, Emil Ram, Shay Zelman, and Avi Adrian.

After spending a year in NYC between 1991 to 1992, Rothbard returned to Israel to accept several teaching positions. In 1995, Avi Rothbard relocated to Boston Mass after earning a scholarship to Berklee College of Music. Berklee was a great place to challenge his musical skills; until his graduation in 1999, his performing experience included working with various outstanding musicians such as Jeremy Pelt, Andy McGhee, Bob Moses, and Phil Wilson. During his years at Berklee, Mr. Rothbard won The Jimmy Hendrix Award, Boston Jazz Society Award, Guitar Dpt. Achievement Award and The William Leavitt Award. Mr. Rothbard has been teaching at the Annual Berklee Guitar Sessions between the years 2000 and 2009 and he is a dedicated teacher/educator who is responsible for the success of many aspiring guitarists around the world. Other master classes include appearances at City College of New York (while earning his MA from CUNY) as well as clinics in JCC and Indiana University, to name a few.