Jo Lawry (Being a Backing Singer)

Jo Lawry (Being a Backing Singer)

Artist: Jo Lawry
Length: 21:50
Subtitles: English, Spanish
Description: In this backing vocalist masterclass, acclaimed background singer Jo Lawry (Sting, Paul Simon, Peter Gabriel, Twenty Feet From Stardom, etc.) tells you what it takes to get and keep a gig. Jo breaks down various aspects of being a professional sideman/side-woman including preparation, attitude, etiquette, maximizing your value and more. If you want some career advice from a top-level backing singer, this masterclass is for you. NOTE: This is a lecture and does not include musical examples.

Topics Covered: Being a Backing Singer, Sting, Etiquette, Having a Good Attitude, Being Professional, Rehearsals, Being Prepared, Your Skill Set, Maximizing Your Value, Keeping the Gig, Staying Healthy, Punctuality, Being an Asset, Etc. 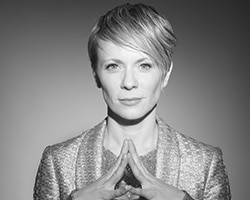 Australian-born, New York based vocalist Jo Lawry’s debut album I Want to Be Happy was released in 2008 to rave reviews, and named among the “Best CDs of the Decade” by Downbeat Magazine. She has become known beyond jazz circles, however, for her work with Sting – with whom she has been recording and touring since 2009 – and more recently with Paul Simon and Peter Gabriel. She was also featured in the recent Oscar-winning documentary, 20 Feet from Stardom.

“Jo Lawry numbers among our favorite discoveries of the past year.” Time Out New York

“She has a gift for the music of words, a feel for the stories they tell and an instinct for how to drape a lyric elegantly across a vivid melody… Lawry, effervescent and riveting, imbued her singing with a freedom.” Sydney Morning Morning Herald