Artist: Jordan Young
Length: 36:05
Description: In this jazz drum masterclass, NYC drummer Jordan Young breaks down his system for comping on the instrument. Jordan brings you through various exercises and permutations so you can creatively apply new combinations and stickings to your accompaniment. If you want to spice up your comping on the drumset, this jazz drum lesson is for you. 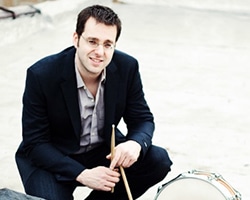 “JAZZ JUKEBOX” – Drummer Jordan Young shines his light with his new record, Jazz Jukebox (Posi-Tone, 2016). The album features Brian Charette on organ, Matt Chertkoff on guitar, and Nick Hempton on sax. In recent years, Young has had steady weekly gigs at New York’s Authentic Bar B Flat, which the group has honed their sound. While rooted in the jazz tradition, the musicians come together to form and create a modern organ group sound. Their range of influences creates a deep and di- verse musical palette that is naturally inspired by classic 1960s organists such as Jimmy Smith, Jack McDuff, Larry Young and Melvin Rhyne, to name a few. Influences from non jazz artists such as the Beatles, Jim Croce, and 70’s TV composer Charles Fox contribute to the creation of a sound on this album that is well-rounded and appealing to many diverse audiences.

“A BIT ABOUT JY” – Born in Detroit, Michigan in 1978, music was always a continuous presence in Young’s upbringing. His earliest musical influences came from his mother’s vast record collection and the music all around him. He began to play drums at age ten, immediately falling in love with the instrument. As soon as he was good enough, he started playing in local rock, punk and heavy metal bands. His first experience playing jazz was in his high school jazz band, where he was first chair all four years. His exposure to a variety of styles at an early age helped him to become the versatile and creative musician he is today.

Young attended the Jazz Studies Program at The University of Michigan, and attended many jam sessions in the Metro-Detroit Area, which led to gigs with Detroit jazz legends Donald Walden, Marcus Belgrave, Teddy Harris, Jr., James Carter, and Rodney Whitaker. Meanwhile, at the U of M, Young was taken under the wing of world-renowned drummer and composer, Gerald Cleaver. Studying with Cleaver, Young really began to dig deep into world of jazz drumming, absorbing him- self in the music of master drummers like Art Blakey, Jimmy Cobb, and “Philly” Joe Jones.

Young moved to New York City and has been an active part of the NYC jazz scene, studying with world class educator John Riley, and earning his masters from Manhattan School of Music. Young has two previous albums (Jordan Young Group in 2010 and Cymbal Melodies in 2012) that were very well received by the jazz press. Recently, Young has been a member of Juilliard Artist jazz ensemble, and has taken part in the prestigious Artist Diploma program at The Juilliard School, which travels the world representing the school. It was here where he began to learn under the tutelage of the great Wynton Marsalis. In late 2015, Young did a U.S. Embassy state tour with vocalist Gabrielle Stravelli through the organization called “American Voices,” which included international shows and clinics in Moldova, Azerbaijan, Slovania and Malta.

Young maintains an active private teaching studio in Brooklyn, NY, and continues to travel the world as a bandleader and sideman. He is also a proud endorser of Canopus drums.